The building management originally asked EBL Électrique to replace the lampposts as part of the project. Upon inspection, Denis Dubois, the electrician for EBL Électrique who oversaw the installation, found that there was no need for replacement.

“We just had to grind, sand and paint the lampposts, and cut the existing mounting hardware off of a few poles located on the upper deck,” Dubois says.

For the fixtures, Dubois reached out to Daniel Herz at Concept Illumination.

“I’ve worked with Concept Illumination before, they’re always very professional,” Dubois says. “They make sure that all the correct materials are delivered and properly identified which makes our job easier. The installation was very smooth.”

Concept Illumination conducted a detailed site audit to collect all relevant data, including the existing dimensions, voltages, wattages and existing light levels with support from EBL. The information collected was used to specify and supply all materials (fixtures, hardware and accessories) and was backed by a robust photometric analysis. The company also created detailed guides to facilitate the installation, while offering on-site support for the installers.

“We like to do projects with Concept Illumination, it’s fantastic to work with them,” Dubois says. “No problems. No complaints. Always on target.”

Dubois ended up painting 24 lampposts and replacing 68 400W pole-mounted HPS fixtures with 60 LED fixtures (56 100W and four 150W), including the mounting hardware required for a quick and seamless installation. The voltage was converted from 600V down to 347V. To ensure there was no light trespass onto neighbouring properties, visors were installed on four of the fixtures. The project took a total of three days for the LED conversion and a week for the lamppost restorations. The project was completed in November 2020.

In addition to offering on-site support, Concept Illumination applied for the available rebates on behalf of the end user, taking care of all the paperwork and overseeing the application process. The property owners will be receiving a rebate of $7,000 granted by Hydro Québec.

To date, management is happy with the exterior lighting upgrades.

“It was due for a change,” says Samuel Pollak, who managed the project for Plaza Côte-des-Neiges. He adds that he found the price for the fixtures very reasonable.  “So far, we’re satisfied – and they’re nice looking as well.” 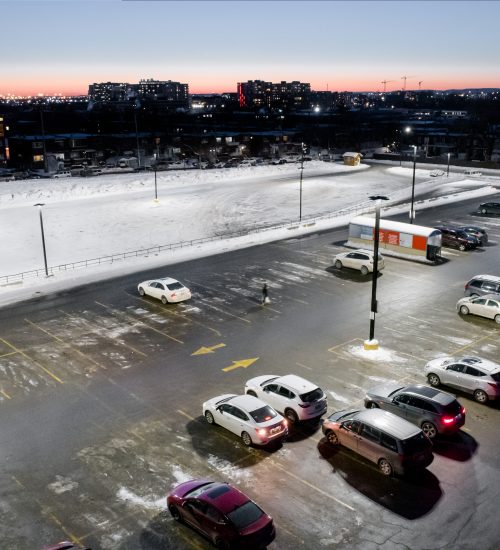 View Full Project Video
“We like to do projects with Concept Illumination, it’s fantastic to work with them. No problems. No complaints. Always on target.”