Standing at 30-storeys, 800 René-Lévesque West is a well-known property in the Polaris Realty portfolio. Part of a complex of facilities that includes the Fairmont Le Reine Elizabeth Hotel, banking services, restaurants, shops, and some of the best entertainment in the city, the building has been retrofitted with modern and efficient architectural and mechanical systems.

When it came to ensuring the lighting met the same high standard of efficiency, Polaris turned to Concept Illumination. “We were asked to take a look at the lighting in the lobby and elevators,” said Daniel Herz, Regional Manager at Concept Illumination. “The mandate was to provide a solution that would maintain the level of illumination but reduce operating cost and energy consumption.”

Concept Illumination proposed replacing the existing halogen PAR and MR lamps in the lobby with LED PAR38, PAR30 and PAR20 alternatives. A combination of beam angles was used in order to maintain a consistent light on the floor, without spots, in a lobby that has 3 ceiling levels.

In addition to the functional lighting, LED PAR20 and PAR38 lamps with a 25° beam were used to produce accent effects on the walls and highlight architectural elements.

All lamps chosen were 3000K – a colour temperature that perfectly complements the light marble and steel surfaces in the building, to provide an energising and modern environment.

Polaris was able to attain a rebate from Hydro Quebec for the purchase of the replacement LEDs which equated to a 59% reduction in the cost of the lamps.

Ronald Blais explains: “We knew there were incentives available, but we didn’t know how to go about getting them. Part of the Concept Illumination proposal included the rebates we could expect to see by choosing the LED lamps. The level of savings was significant, and we didn’t have to do anything but sign the submission paperwork that Concept Illumination prepared for us.”

Hydro Quebec estimates the switch from halogen to LED will save Polaris 70,500 kWh annually – a figure that takes into account the effect the upgraded lighting will have on heating and cooling systems. The payback period after incentives has been assessed at 5 months without including savings in labour costs and lamp installation.

“We’re delighted with the results,” said Blais. “The rebates we received kept the initial cost low and enabled us to move ahead. The energy and maintenance savings we will realise in the coming years will also be significant. The lamps look great too!”

“We’re delighted with the results. The rebates we received kept the initial cost low and enabled us to move ahead. The energy and maintenance savings we will realize in the coming years will also be significant. The lamps look great too!” 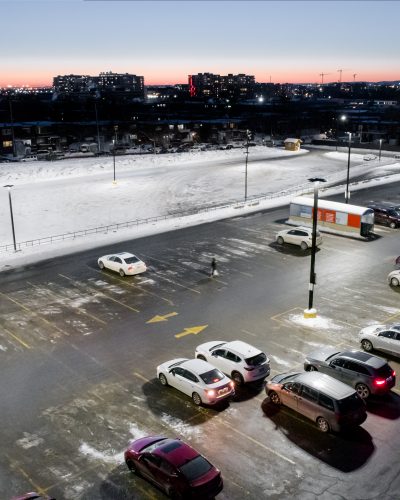